The Raspberry Pi is a small single-board computer known for allowing to hack with hardware thanks to it's general purpose input/output (GPIO) pin header. The computer has only an analog output (no input) and the GPIO header has no analog-to-digital (ADC) converters. It can however be interfaced to any custom extension boards with 3V3 logic. Furthermore, any USB Soundcard can be attached to a Raspberry Pi (given the softwware support). The board can run both Microsoft Windows as well as a variety of Linux distributions. For further information, go to the English wikipedia article about the Raspberry Pi

How to use a Raspberry for analog data aquisition 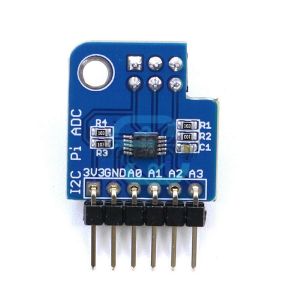 A simple I2C adapter for connecting an ADC chip to digital hardware (such as the Raspberry Pi). Note the digital output (top, below the board) and analog input (bottom).

The Raspberry Pi does not have a general purpose Analog-to-Digital (ADC) or Digital-to-Analog (DAC) converter available on the GPIO pins. There are *hats* available which provide the neccessary hardware, for instance

The Raspberry Pi has Analog output, realized with PWM (pulse width modulation). This is not high quality but can be used for feeding analog data into THAT.

Efforts of connecting The Analog Thing to a Raspberry Pi

Please collect your efforts of connecting The Analog Thing to a Raspberry Pi at this point!

While the traditional Raspberry Pi in it's various revisions always had a similar tooling of input/outputs, there are similarly named products which have less (or even more) capabilities: