The greek symbol Sigma is the mathematical notation for a sum

A Summer is an elementary analog computing element. It carries out a summation of its inputs, as in a + b = c. Here, a and b are called the summands and c is the sum. The Analog Thing features four summers, allowing four summations in a circuit.

Elements of Each Summer on The Analog Thing

Basic Usage of a Summer on The Analog Thing 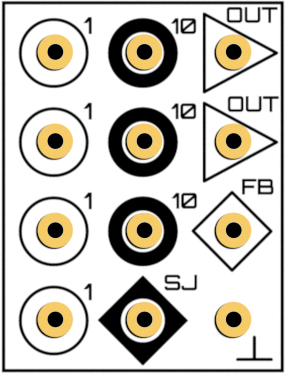 All connector sockets of a single summer

Attention: Make sure the sum of your inputs does not exceed the machine unit (±1), otherwise an overload occurs (indicated by the OL LED)

Extended Usage of a Summer

Mathematics and Electronics about analog summing

Summation in analog computers is based on Kirchhoffs Law, which describes the conservation of current, or electrons, in particular. In a summing point (summing junction), the sum of the incoming and outgoing currents add up to zero. Summers are implemented with closed-loop operational amplifiers [1]. On THAT, you find the corresponding electronic circuits in File:Anathing_v1.0_base_3.pdf. As you can see there, summers (as well as Integrators) are implemented with ICs called TL074H. If you look for the Datasheet for the TL074H, you find for instance section 6.17 Electrical Characteristics: TL07xH on page 17.

Other summers in The Analog Thing

Inverters are electronically identical to summers. With their summing junctions, they can be used as summers if no more summers are available. See the article about Inverters and the XIR for more details. The Integrators are by definition also summing but cannot be stopped from integrating except in IC mode (see Modes).