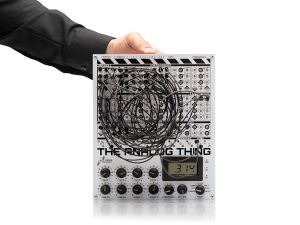 The Analog Thing is a high-quality considerably low-cost analog computer made by Anabrid GmbH. 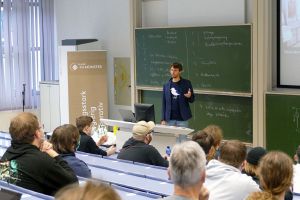 Sven talking about analog computing at the electronics and computer science faculty of the University of Applied Sciences Münster in October 2021. 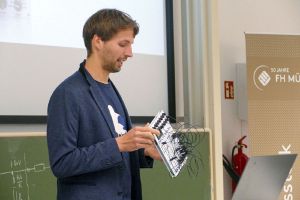 Sven presenting The Analog Thing at this very event. 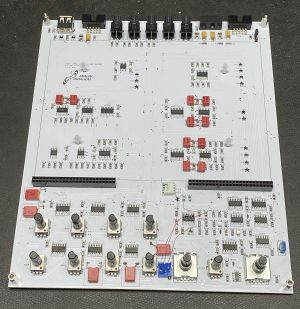 Doesn't look expensive, but it is: Equipped base board of The Analog Thing, where the average price of a single analog integrated circuit (IC) is a few Euro, much more expensive then digital ICs.

This is a small essay about the price tag of The Analog Thing (THAT). All opinions are private (of User:Sven) and do not neccessarily reflect the ones of others.

A Raspberry costs 13€. Why is THAT so expensive?

I presented The Analog Thing many times in the past few months. The typical target audience were students at universities. When they asked me about the price, they were not that happy anymore. At https://shop.anabrid.com, it is currently listed for 225€, having the academic discount already included. Of course this is one order of magnitude more expensive then a Raspberry Pi (around 20-50€) and two orders of magnitude more expensive then a microcontroller (such as an ESP32 für around 2-8€). This is quite some money to start tinkering with analog hardware. You are right. In order to understand about the price, let's look what is inside and what drives the cost.

The Analog Thing ships two multipliers. Each of them is actually a single IC called AD633JR. It is by far the most expensive single part of the overall board, with a whopping purchase price of 6,65€. For this amount of money, you get a fully equiped microcontroller development board, for instance the ESP32 at eBay. So why the heck is this microprocessor actually so cheap?

This is all about the economies of scale. Chips get cheap when they are produced in masses. Analog parts are not as much of a mass product as digital parts are. In particular, The Analog Thing is not yet produced in masses by some large vendor. This mostly reflects in big parts such as the printed circuit board (PCB) itself. A single PCB costs us around 15€, while the price drops to around 5€ when ordering 1000 PCBs.

Furthermore, in the digital world, there is another adjustment screw: The processing quality. While the digital chip only has to be good enought that the binary states can barely be processed by the next stage, analog computing is high precision electronics at it heart. The price difference between a SMD resistor with 1% tolerance and 0.1% tolerance is around 500%.

Within the laws of error propagation, the worst components in your computing circuit will pull down the overall quality of the result. As The Analog Thing is announced as a high quality product, you will find only the more expensive parts on the board. This is what drives the price, for the price of being able to do bleeding-edge analog computing and not searching the signal somewhere within the noise.

It's all about the perspective

If you are used to pricy lab equipment, then it is quite likely that you don't find the price of The Analog Thing expensive at all. If you recently bought a new flagship smartphone for 1000€, probably the same applies. Of course The Analog Thing is not competitive against a smartphone. On the level of computing power, it is not even competitive to a 2€ digital microprocessor. This is not result of a conspiracy, bad pricing, profit move or bad marketing but just the simple truth of analog vs. digital. The analog advantage (we also call it analog supremacy in analogy to quantum supremacy) plays off when the analog circuit is very large. Just for illustrative purposes, think of buying 100 THATs for 30T€ and putting them together (Minion mode and digitally controlled). It is quite likely that such a computer could outrun a 30T€ high end digital server both in computing speed and for sure in power requirement.

The Analog Thing is open hardware, so if you think you can produce it cheaper then we can do, please go on! In fact, if you really want to do electronics without spending hundreds of Euros, why not buy a breadboard and a few cheap operational amplifiers? This won't give you the level of abstraction which The Analog Thing provides, but you can experience analog computing for a net price of a few euros.